TENNESSEE IRON WILL BE BACK AT BERT’S BLACK WIDOW HARLEY DAVIDSON IN PORT CHARLOTTE, FL

Tennessee Iron has the honor of performing at this celebration of life for Jimmy Van Zant, and for this benefit to raise awareness of Hep C and screening as well as raise money for Cancer. MANY other bands will be performing. Screening will be available at this event also. This is an event you won’t want to miss!

TENNESSEE IRON IS BACK AT SPACE COAST HD IN PALM BAY, FL

Tennessee Iron is Back LIVE at "The Nest", St Augustine, FL

TN IRON IS BACK! to rock the Orioles Nest #324 and bringing our "Original High Test Tennessee Boogie"! COME JOIN THE PARTY!

TN IRON IS COMING BACK TO FLORIDA!
TN IRON will be LIVE at Space Coast Harley Davidson in Palm Bay, FL, Oct. 18. Come on by and "git down to our Original High-Test Tennessee Boogie"!

It's time for the Southern Sons of Claiborne co Annual Fall Fest. Great Food, Awesome Music provided by TN IRON, and a guaranteed good time! Come out and party with us

Tennessee Iron is BACK Live at Big Dummy's Pub to bring their own brand of Original High test Tennessee Boogie. See you there! 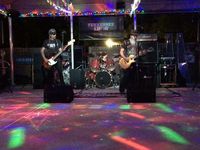 Tennessee Iron Is Back at L'iL Jo's Bike Night

Bike Night at L'il Jo's and Tennessee Iron will be there LIVE! Come out as we rock the house. Awesome Food, Awesome Drinks, Awesome Music 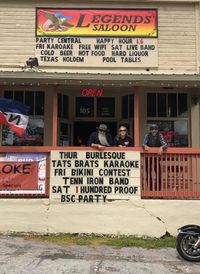 Tennessee Iron will be LIVE at Legends for the Eureka Springs Spring Fling Bike Rally, bringing their own brand of HIGH TEST TENNESSEE BOOGIE! 🎶 If you LOVE Southern Rock, then you'll LOVE Tennessee Iron! 🎶 “CRUISE ON UP AND GIT DOWN”

Bringing three lifetimes of musical experience together, the Tennessee Iron band is the culmination of Butch’s lifelong musical dream.  The band was formed in 2007, originally crafting and honing the songs under the name Main Drive Gear.

Riding and rocking is more than a hobby or a profession for them, it is a way of life.  This is an expression of their beliefs that is very evident in the power and message of the music.  The stories within the music, written by songwriter Butch Harrell, describe a gutsy, gritty reality of life that everyone can relate to. A classic rock feel permeates the stage as the band performs, bringing a sense of quality that is rare in today’s music. Tennessee Iron also has an entire catalog of classic cover tunes that pay tribute to the original artists with the same veracity that they attack their original music.  Experience this excitement for yourself!  Come to our next show!

“The stories within the music, written by songwriter Butch Harrell, describe a gutsy, gritty reality of life that everyone can relate to. ”